Unbelievable that it took me so long to try Ricky's Fish Tacos!  Ricky Pina's Baja-style fish and shrimp tacos have been legendary in Los Angeles for several years now but for some reason, I've never been able to haul myself to Silverlake to his taco cart. Don't get me wrong; I'm willing to travel long-distances for food alone. Day-trip to San Francisco for Golden Gate Bakery's egg tarts? Ha, no one can stop me on the 5 Freeway. Drive to Buellton for steak dinner at the Hitching Post? Hop in the car and let's go!
I guess I just needed a crazy fish taco craving to get me weaving traffic from Culver City to Silverlake on a Saturday morning. 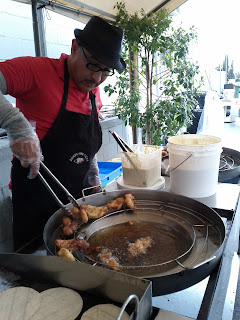 Ricky's sort of like a jack-of-all-trades. He built his first taco cart out of a filing cabinet he had at home!  Find out more about Ricky and how he started his taco business in his recent interview with LA Weekly (Part 1, Part 2). 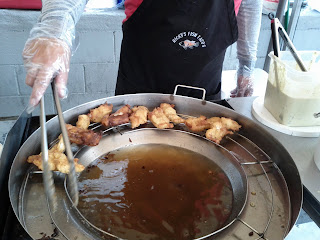 Place your order and Ricky will get the frying going. If you're lucky, he'll have lobster sometimes. Then grab one of the three fold-up tables he has in front of his stand and wait for deliciousness. The line can get a little long and you might have to share a table but who cares? Everyone is there for good food. 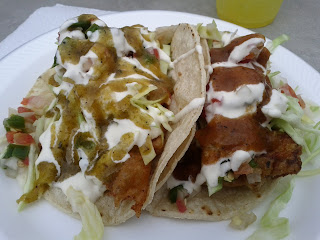 Fish Taco Heaven
Served in each warm mid-size tortilla are meaty pieces of fish, fried to crispy perfection in a light batter and topped with crunchy cabbage and fresh pico de gallo. Drizzle some of Ricky's special mayo and salsa verde or rojo. Then close your eyes and one bite will transport you to Ensenada. 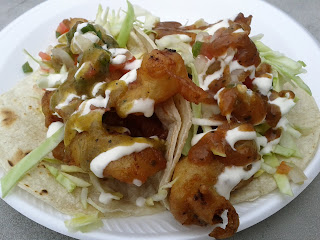 Shrimp Taco Heaven
This shrimp is serious. Good-size, plump and deveined. It's fried in the same light batter and comes with the same toppings. You've got to get a shrimp and fish taco. 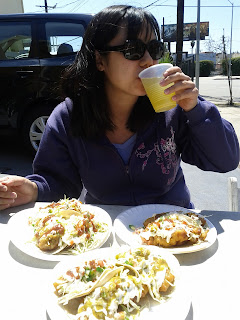 Wash everything down with cups of Ricky's agua frescas and you've got a perfect start on your weekend.
Dan and I have been to Ricky's twice in the past three weeks.  We order four shrimp and four fish tacos every time. Yes, that's a lot of food.  I admit we indulge at Ricky's but how could we resist when faced with such deliciousness on a hungry Saturday morning?!
Ricky's Fish Tacos
1400 N. Virgil Ave.,
Los Angeles, CA 90027
*Follow Ricky on Twitter to find out when his cart is open.  He's usually open around 11:30am or Noon and he'll sell out in four or five hours.
Via-Mar Seafood
5111 N Figueroa St
Los Angeles, CA 90042
*If you're in the Highland Park area, I also recommend Via-Mar for Baja-style fish and shrimp tacos.  One downside with Via-Mar though is their shrimp aren't deveined but they've got delicious fried and grilled fish tacos.
Posted by Hungry Kat at 10:26 PM