I embarked on a 7-hour epic taco crawl last Sunday with twelve other taco lovers.

Guided by Gustavo Arellano (author and editor of the OC Weekly), Bill Esparza (of Street Gourmet LA) and Lesley Tellez (author of the new cookbook Eat Mexico), we traversed the streets of Los Angeles and Orange County to raise our "taco consciousness" and enjoy some of the best street food and hidden gems SoCal had to offer. Between delicious taco bites and refreshing Mexican drinks, our intrepid guides introduced us to new neighborhoods and taught us about the differing styles of cuisine in each region of Mexico. We talked about how immigrants have innovated on these food traditions to give Americans the best Mexican food outside of Mexico and we lamented on the class warfare on street food and the often absurd and classist health department regulations on both street food and ethnic food traditions. Street food is not a crime!

One of the most memorable areas we visited was the Olympic Mercado / Pinata District. Gustavo called it "beautiful chaos" and I couldn't agree more. It's a shock to your senses. The giant piñatas (sadly did not find a Donald Trump piñata we could smash), vendors selling everything from household items to tchotchkes and of course, lots of lots of street food vendors. It's crowded but somehow orderly. The regulars and the savvy know when to slip through a crack in the crowd or make a gentle nudge to keep moving forward. It reminded me a lot of night markets in Asia and I absolutely love that vibrant energy. Olympic Mercado is only open on weekends and starts on Olympic Blvd cross Central Ave. From there, just meander along Olympic and let the scene or scent of grilled meat guide you. 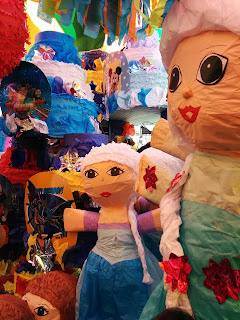 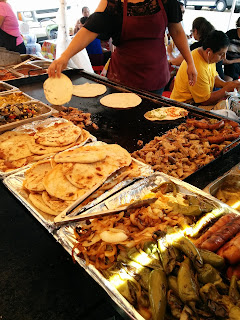 Gustavo and Bill also gave us an eye-opening education on the tortilla evil that exists in Mission and Guerrero brand tortillas. In short, think Monsanto, think putting good small tortilla makers out of business and think corrupt business practices. This was one of the most important things I learned on this taco crawl. See Gustavo's write-up here to learn more. So, as Gustavo likes to say, raise your "taco consciousness" and eat good tacos by supporting good tortillas and stay away from that artificial, bland and evil franken-tilla!

But without further adieu, I give you our Epic Taco Crawl and I hope you'll go out and do some exploring yourself.

Epic Taco Crawl - LA Stop #1
Mariscos Jalisco specializes in seafood tacos, ceviches and more. We got there around 11:15am and there was already a sidewalk full of people enjoying an early lunch. We had to pace ourselves so we only tried the Tacos de Camaron (shrimp taco). It was so good. I'd take this over a fancy seafood dinner at Providence any day. Crispy taco shell, well-seasoned shrimp filling and the avocado salsa was a great paring. The owner said adding avocado is unique to his preparation for this style of taco. 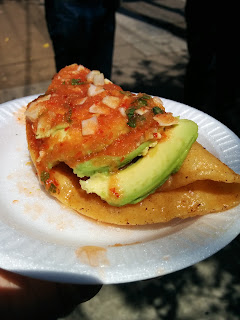 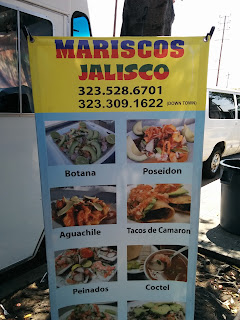 Epic Taco Crawl - LA Stop #2
The stand on the corner of Kohler and Olympic has no name but you can't miss it. The stand was in full swing when we got there and there were no less than six to eight people pressing fresh masa tortillas, grilling the tortillas and manning the various ingredients on the grill. This was one of my favorites. I loved the charred crispy pork topped with Monterey Jack and salty cotija cheese. And the tortilla was outstanding too. 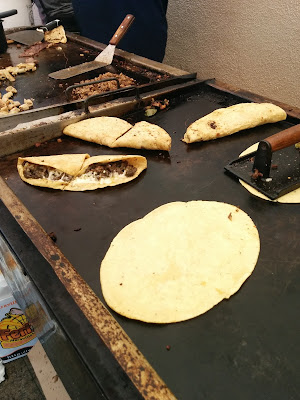 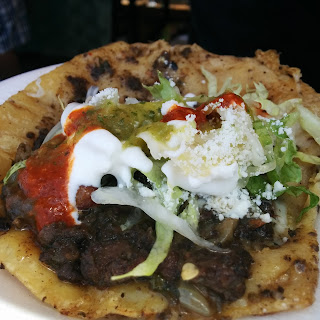 Epic Taco Crawl - LA Stop #3
Next, we drove about 5 minutes to Guerrilla Tacos which does creative spins on taco fillings and uses gourmet ingredients like veal sausage. The truck is always parked outside some fancy hipster coffee shop. On Sunday, it was parked outside Blue Bottle Coffee in the Arts District of Downtown LA. Standing amongst the well-dressed hipsters and the gleaming counters of Blue Bottle, I felt worlds away (and a little out of place). The tacos here were good but I prefer the energy and style at Olympic Mercado. 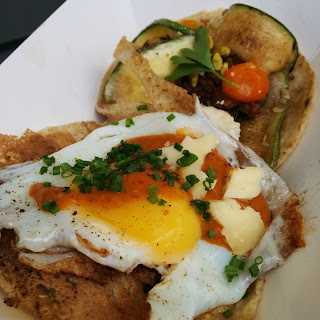 Epic Taco Crawl - LA/OC Stop #4
This was quite a find! Rocio's Mexican Kitchen is in Bell Gardens so I guess that makes it halfway between LA and the OC. The owner of Rocio's does a lot of restaurant consulting and this is her first brick-and-mortar which specializes in Oaxacan cuisine. The major highlight was this off-menu chileatole soup/stew. The chile gave the perfect spicy kick to the sweet corn and fresh masa in the soup. I want to eat this every day but especially on a sick day. It tasted like the perfect comfort food.

We also enjoyed chips with four types of mole and the chicken verde and pork purslane tacos. The pork purslane was stewed till tender in this fragrant herb sauce. I imagine that'd be delicious over rice or noodles too.

Epic Taco Crawl - OC Stop #5
Taco Maria is run by Carlos Salgado who was crowned best new chef of 2015 by Food & Wine Magazine. Classically trained, Salgado when back to the OC to help his family's struggling eatery and he ended up starting Taco Maria. It's a beautiful restaurant located in a slick shopping center in Costa Mesa and Salgado is doing something really creative and innovative here to expand and challenge people's assumptions about Mexican food.

We started our tasting with a Hokkaido scallop bathed in chilled aguachile broth. The sweet scallop paired extremely well with the spicy but refreshing aguachile. I loved the cilantro flowers that garnished the dish. Then we ended with a chicken mole taco topped with pickled onions, roasted almonds and cheese. The highlight of this taco was the blue corn tortilla that Salgada made fresh that day. I can't wait to go back for their 4-course dinner prix fixe. Gustavo says its an experience to be savored.

Epic Taco Crawl - OC Stop #6
Alebrijes Grill (aka Pink Taco Truck) is the David to the Goliath that is the City of Santa Ana. Eight years ago, the City of Santa Ana tried to enforce some absurd parking regulation that would have required food trucks to move every 30 minutes. Alebrijes sued the City and won!

Of course, Alebrijes is really known for their unique "Battleship Taco" (aka Taco Acorazado). What you see below is the half size which was still really big. The full size is a huge taco because it has a layer of deliciously seasoned rice and then it's piled with steak milanese, avocado, tomatoes, nopales (cactus) and grilled onions. In order to tackle this, you deconstruct it a little bit and eat some of the ingredients first. At some point, you'll see that you've eaten enough to wrap up the taco and pick it up to enjoy all the layers together. I won't lie. I was really full at this point but I soldiered on and was silently thankful that this was only a half-portion.

Extra Extra!
Olympic Mercado is full of opportunities for discovery. There were fresh crunchy chicharones (fried pork skin), chile lime mango, fresh coconuts, Mexican sherberts and all kinds of Mexican juices like lemon lime with chia seeds, tamarind, alfalfa and more. One of the most unique finds was this fermented juice called pulque made from the maguey plant. It's a milky and slightly viscous drink that reminded me of coconut water. Per our guides, pulque is made and drunk on the same day because the drink becomes too viscous from the continuous fermentation. And it is best made with fresh maguey; do not drink any that's made from canned maguey.

Pulque drink. This picture is all sorts of awesome.

With the end of our epic taco crawl, I just want to say again that street food is not a crime and raise your taco consciousness and support local tortilla makers! The OC Weekly has a regular Tortilla Tuesdays column that can help you find the best tortillas.