I'm not very good at trivia but pride and a small competitive streak in me compelled me to place a side bet with a friend on an opposing team that I would win Hollywood movie trivia at work last Friday. I seriously thought I would lose but thanks to my team's expertise on Star Wars and general Oscar and movie quote knowledge and my ability to name Meryl Streep's Oscar-nominated movies (Can you name all 16 and tell which one she actually won for and what role she played?), we won Second Place. Heh, Second Place was good enough to win my opponent....and the prize? All-I-Can-Eat Kalbi at Park's BBQ! Oh, victory is sweet. 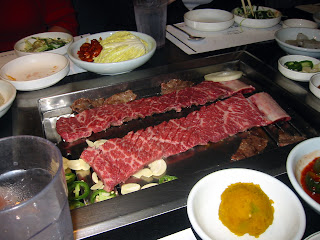 Kalbi is delicous but "Victory Kalbi" is heavenly. The meat at Park's superb. Check out that well-marbled fat! 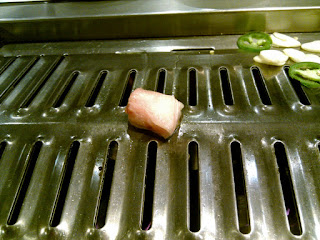 I love that Park's primes their grills with a cube of beef fat.
Okay, so my plan to eat plates and plates of kalbi didn't really happen but it was fun to trash-talk and make my friend nervous. I bet he hit the ATM hard before he came to dinner. He still insists that no man should have to be able to name 16 Meryl Streep movies, Oscar or no Oscar, but I counter that no woman should have to name 16 Bruce Willis movies either. And I can't believe he'd equate Bruce with Meryl!
Posted by Hungry Kat at 10:55 PM

Er, I wasn't quite true to my name. We went in a group and if you divide the orders by person, I only ate one order so it wasn't plates and plates :P

Btw, thank you again for the class on Saturday. I tried my newly acquired skillz at Lazy Ox the next night but the pictures still didn't come out bright enough. I think I need to play with the ISO and other functions more. I was too eager to eat so I didn't mess with the camera right away.