I was halfway to the LA Street Food Fest around 11:30am yesterday and the 10 Fwy slowed to a crawl as I got near downtown. Sensing something was not right, I checked Google Maps on my phone and saw several Google Buzzes from people who were already at the Fest and they were complaining about lines snaking around the block and the estimated time to get in the venue was hours!
My friends and I immediately changed plans and went to Wurstkuche instead where we met a lot of fellow refugees from the Street Food Fest. Wurstkuche is in the historic Arts District near Little Tokyo and it has a delicious (and exotic) selection of sausage sandwiches, Belgian fries with an array of finger-licking sauces and a variety of mostly German and Belgian beers (draft and bottled).
I got a Bockwurst (veal, pork & spices) and a Hot Italian (pork & spices - nice spicy kick!) sandwich and topped it with a of cold Belgian beer called La Chouffe. The sandwiches were awesome but I didn't like the beer so much; it had a weird "stale" aftertaste. (Sorry, no food pictures as we were starving; plus, it was too dark inside to take pictures and I hate using flash.)
Anyway, I'm so glad I didn't have to stand in line for hours yesterday. My friend said it best - Google Maps and Buzz totally revolutionized our Saturday. 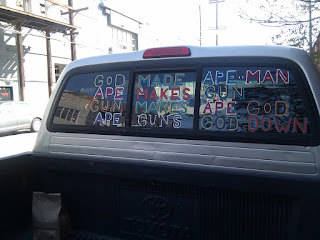 Came upon this truck while strolling the Arts District after our delicious lunch.
We couldn't stop laughing.
Posted by Hungry Kat at 10:15 PM

Seriously. We drove around the block just staring at the line in disbelief... then we drove away :)

A-men! I was chowing on a kickass bowl of $7 Thai noodles while the cool kiddies were wasting their time on not eating. I feel bad though for everyone tho. Great concept, how do you make it a better execution?