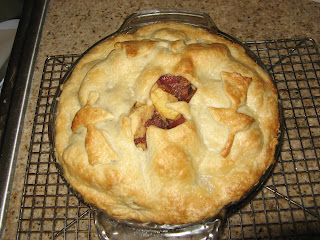 I'll try almost anything once. I love bacon ice cream and I love the mix of the sweet and savory so why not try my hand at baking a Bacon Apple Pie? My chance finally came when someone recently gifted a spankin' brand new KitchenAid mixer to me. (Ha! Does this mean the pressure is off and I can stay single forever now? Because really, why do women go through the hoopla of fancy, expensive marriage ceremonies but for the chance to register for KitchenAids, pots & pans, a million spoons, vases and a whole mess of stuff they may never use? Hmm, I do want a set of these Unison pans.).
I've tried many recipes for pie crusts and so far, I really like this one I found from Shelley Young, a Chicago-based chef who also has a recipe for Bacon Apple Pie. I only used her recipe for pie crust though because I found the lattice bacon top to be too much. Yes, I do have limits. 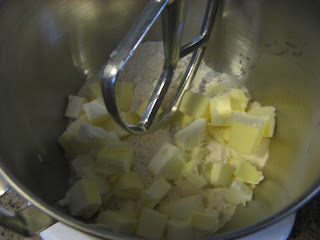 Make sure your butter and shortening is chilled. You want it cold so when it mixes with the flour mixture, you get a good crumbly texture. 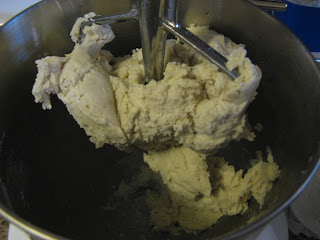 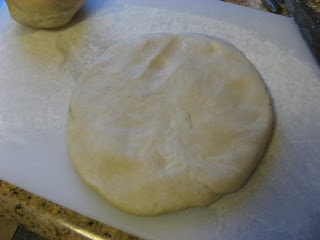 After the dough forms, divide it in half and flatten it into a disc before wrapping tightly and chilling in the refrigerator for 24 hours. Chilling the dough is very important because chilled dough is much easier to roll out and flatten. You don't want to be rolling out a piece of melting, sticky dough. 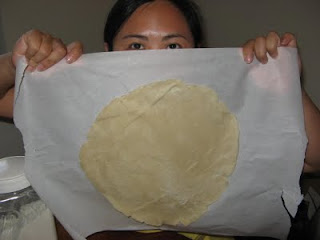 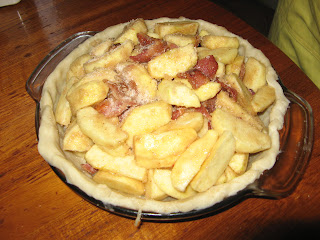 Next, fill it with your fabulous bacon and apple filling. I recommend using thick-cut bacon because there's more meat. I used Gala apples because that was the only kind available at my Farmers Market. You can also use Granny Smiths but try to stay away from the mealy ones from the supermarket. 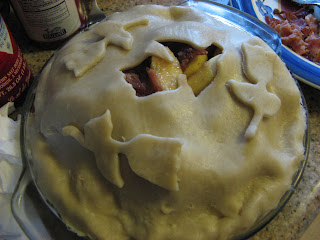 Fit the second pie dough over the filling, cut off the extra dough and tuck in the edges of the top dough into the bottom dough. Be sure to cut some slits on the top for steam to escape or you can cut some pretty shapes like I did. You can use the extra dough you cut off earlier to cut shapes and lay on top of the pie. 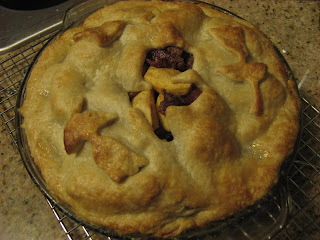 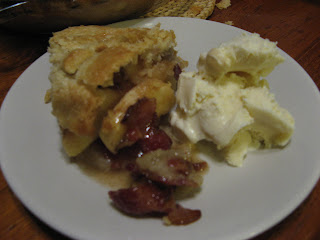 You can serve your Bacon Apple Pie with a piece of smoked cheddar. I can't resist a warm pie with ice cream a la mode so I went with vanilla ice cream.
Verdict? My parents, sisters and I all agree the pie was good but it did not exceed our wildest dreams for a Baaaaacon Apple Pie. The pie crust was perfect - flaky, flaky, flaky with a hint of sweetness from the sugar I added to the flour mixture. The KitchenAid really did its job of thoroughly mixing the butter and shortening to give me a flaky crust; I never got such flaky crust when I was mixing by hand.
I should have sliced my apples thinner and more uniformly because I found out that some pieces were softer than others. Surprisingly, the bacon did not overpower the pie and you can't taste any greasiness which is good. So my verdict is that the bacon is probably unnecessary and a plain old-fashioned Apple Pie is just simple deliciousness that will impress on its own . However, if you're like me and like to try anything once then I say you should try your hand at baking a Bacon Apple Pie.
**I should note that we had the Bacon Apple Pie as dessert after our decadent meal of Iberico de Bellota Pork with Jamon Serrano so we were stuffed from our dinner and bacon just pales next to Iberico de Bellota. Hmm, perhaps I should try this again with the pie as the only course.

*(Correction: I previously wrote that this will make a double crust pie. That's incorrect. This is enough if you are making a single crust pie with a bacon lattice top. Double the recipe if you want to make a double crust pie like I did here. When you get to step 4, after you form a ball with the dough, use a big clean knife and cut the ball in half. Reshape into a ball and follow step 5 and 6.)

from Eclectic Gecko with some extra notes from me

omigosh, I've been craving homemade apple pie + vanilla ice cream in India, ever since I saw it two weeks on the menu at a restaurant in Allahabad but was denied.

The addition of bacon to the apple pie sounds heavenly!