I love to eat. I love to cook. I'm crazy about finding good restaurants to try. Oh, and I'm on a diet to lose 20 pounds (ideally in 3 months). See how these interests conflict with each other? If you like to cook and eat (and perhaps diet occassionally :) ), I hope you'll find my posts useful, entertaining or maybe just mildly amusing.
Jamon (ham) Iberico is the very dreamy Spanish version of prosciutto. There are several types of jamon Iberico but Iberico de Bellota is the best in its class. The meat comes from free-range black Iberian pigs that feed almost exclusively on acorns and fresh herbs in Spain. Fat is well-marbled throughout the tender meat and cured from months to a few years. You cannot help but close your eyes when you slowly melt the fat with the warmth of your mouth and savor the rich, nutty and salty flavors. Don't worry. Due to it's acorn diet, Iberico Ham is very high in monounsaturated fats which is supposed to lower your LDL cholesterol and raise HDL cholesterol. That's a good thing!
So, imagine my supreme excitement when Tasting Table announced that due to Wagshal's Market in D. C. and Chef Jose Andres' efforts, fresh Iberico de Bellota pork from Fermin, a leading Iberico de Bellota producer in Spain, is available for the first time in the U.S. That means I don't have to eat it cured and I could flex my cooking muscles and get creative! (Btw, Wagshal's is selling the pork exclusively and it's also being served in Jose Andres' restaurants in D.C. Supplies are limited.)
After getting some advice from Wagshal's meat department, I settled on 2 pounds of Iberico pork loin and had it overnighted. Then I invited my parents and told them I had the world's best pork to motivate them to drive 30 miles to my place. Wagshal's sent five of Jose Andres' recipes along with the pork. At first, I wanted to choose the most complex recipe but I ultimately chose a simpler recipe because it looked like it would let the meat's flavor shine by itself.
Lomo de cerdo adado en sal con Jamon
(Iberico de Bellota Pork Loin baked in sea salt with sliced Spanish cured Ham) 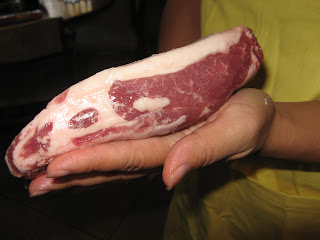 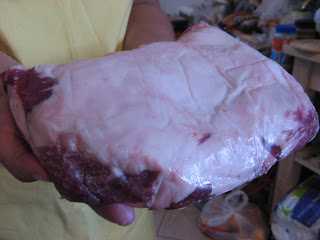 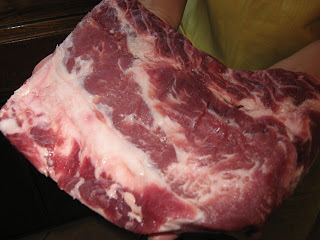 Look at how red that meat is and how delicious that marbled fat looks. The meat came carefully seal-wrapped. All I had to do was open the seal and pat the meat dry with paper towels. 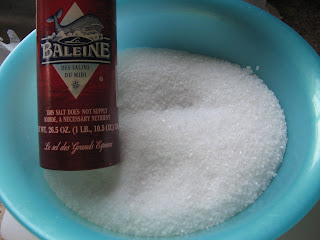 This is what 3 pounds of coarse sea salt looks like. I think I should have used fine sea salt instead but I didn't know which kind to buy since the recipe did not specify. Even after mixing in the water the recipe called for, the salt still didn't firm up as well as I expected. 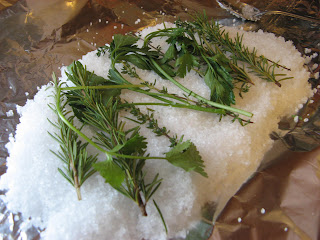 I didn't have a large/wide piece of foil baking sheet so I carefully folded two pieces of foil together and laid out half the salt and placed the herbs on top. I then placed the pork on top and put the rest of the herbs on the pork and buried it with the rest of the salt. Pack the salt well. Also, try to buy fresh herbs from your Farmers Market or its even better if you have some in your herb garden. You want your herbs as fresh as possible. 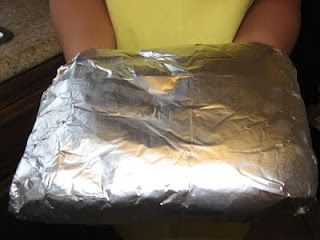 Wrap the pork tightly with the foil and put it on a baking tray. The recipe said to bake it in the oven for 25 minutes at 400 degrees. I think my home oven must be faulty or just not as strong as commercial ovens because 25 minutes was definitely not enough. I know the meat should be served slightly pink but my pork was still too raw so I had to leave it in the oven for an extra 15 minutes. Even then, the thickest middle portion was too raw and I ended up quickly pan-searing the too-raw pieces because the rest of my dishes were getting cold. I recommend buying an oven temperature gauge (I need to buy one!) to make sure your oven is hot enough. 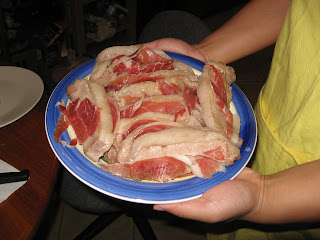 Voila! Iberico de Bellota Pork Loin is done! The red meat you see is the Jamon Serrano I laid between the slices of Iberico Pork. I wanted to get Jamon Iberico but Surfas (a cook's and foodie's paradise in Culver City) is out until September. It's a sight to behold and admire when Surfas has it. They place the entire cured leg at the cheese counter and it's sliced to order. It's about $130 per pound. Jamon Serrano is much more affordable at around $24 per pound and it's still delicious (although Jamon Iberico will induce an orgasmic sigh). 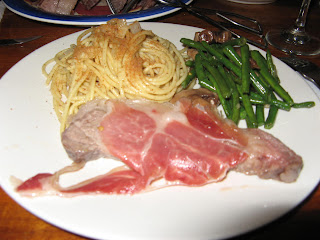 I served the Iberico de Bellota Pork Loin with sauteed baby green beans from the Farmers Market. How do I describe the pork? I'm not going to be able to do it justice but I'll try my best. It's the best piece of pork I've ever tasted in my life and all it took was just some salt and fresh herbs. My parents were totally impressed and even my vegetarian sister had a small piece.
The warm pork melted the fat on the Serrano ham. The mix of fat juices and the tender, rich meat was like having Fred Astaire tap-dancing in my mouth. There was a subtle nutty flavor in the meat and the fat (THE FAT!) had a crisp, refreshing flavor - it wasn't greasy like you'd expect pork fat to be. A bite of meat with a little bit of fat was just plain heaven. Plain heaven.
I've cooked regular pork loin before and even with marinating overnight, the meat always came out rather bland and boring with the flavors concentrated only on the most outer layer. I've had to rely on cooking an additional sauce or glaze to give more flavor to the meat. This is totally not the case with fresh Iberico de Bellota. You know what? The more I say "Iberico de Bellota," the more beautiful it sounds. If I ever have a kid, maybe I could name him/her "Iberico de Bellota." It just rolls off the tongue :)
My sister also made her specialty to compliment the pork: Spaghetti alla Bottarga (tuna roe....sooooooo good and full of flavors of the sea). I've reaped many rewards from her numerouse trips to Italy.
Coming next: "Bacon Apple Pie. Seriously."
Jose Andres' Recipe for
Lomo de cerdo adado en sal con Jamon
(Iberico de Bellota Pork Loin baked in sea salt with sliced Spanish cured Ham)
Serves 4–6
Posted by Hungry Kat at 10:49 PM

Kat, acorn-fed Spanish pork sounds so delicious, especially after eating mostly vegetarian in India for 6 weeks now. Back home, I often caught Jose Andres' cooking show on PBS. When I get back to California, I will have to order that pork.

Hi Kat - I'm a late-comer to this post. I just received my shipment of Iberico from Wagshall's and was very excited to see your blog! Did you roll and/or tie your roast, or leave it rectangular in shape? Also, how many people did the 2# roast feed in the end? Mine is currently frozen, and I'll be roasting a boneless and a bone-in roast in a couple weeks. Can't wait!

I didn't tie my roast. It was 2lbs and I left it as is and just wrapped it tightly with foil along with the salt and herbs.

Do get an oven thermometer to make sure your oven has the correct temperature? Mine was off by 25 degrees and my meat came out too rare the first time.

I served my 2lb roast to 5 people but it could have easily fed 7. However, I did have other sides.

Thanks a million! Happy Holidays!